You are here: Home1 / Chioggia

Chioggia: the town’s birth can be dated around 2000 B.C. with the Pelagio, a people of sailors from Tessaglia. The decline of the Roman Empire coincided with the arrival of the barbarians, with the first being the Visigoths of King Alaric in 401 B.C., who tried to reach Piedmont but were repeatedly defeated. In 404 it was the turn of the Alans and Vandals. Around 410 the Visigoths came back to Italy and descended the peninsula from the northeast to reach and sack Rome. The cruellest of invasions was by the Huns commanded by Attila who, in 452 B.C., destroyed the towns of Aquileia, Verona, Padua and numerous other settlements. Fear drove the inhabitants to flee the mainland and take refuge in the lagoon islands, increasing the population of the towns there and helping to found new towns like Rivo Alto (the first nucleus of the future Venice, to be precise in what is now the Rialto area).

Chioggia and the other lagoon towns as far as Grado, despite the fact they were dominated by the barbarian peoples (except for the Lombards), managed to maintain their independence, thanks to the precious antique ties with Constantinople. This situation generated the first embryo of the Venetian state, formed of the Adriatic coastal towns governed by tribunes. The most important islands were Grado, Caorle, Bibione, Caorle, Torcello, Equilio, Murano, Malamocco, Rialto, Poveglia and Chioggia. Chioggia belonged to the diocese of Malamocco, which used to be the capital of the Republic, but the lowering of the ground, continuous sea storms and coastal erosion by the sea meant that Malamocco was no longer habitable. Chioggia became the most important centre for the diocese and in 1110 the diocesan seat was moved there, together with the relics of the martyr saints Felice and Fortunato, patron saints for the town.

Chioggia is considered a small Venice having a very similar urban nature to that of Venice itself. Chioggia is an island joined to the mainland by a few roads and, like Venice, is full of bridges, canals, calli (small roads) and campielli (small squares). The most important is the Vena Canal for the palazzos and churches along its banks, and it is crossed by nine bridges, the largest being Ponte Vigo which terminates the canal as it enters the lagoon, and leads to the square of the same name containing a tall column surmounted by St Mark’s lion. The city Cathedral of Santa Maria Assunta, built in the XII century when the bishop’s see was moved to Chioggia. A fire on Christmas night in 1623 destroyed the first building, but the year after the work to build the new cathedral began, using the project by Baldassare Longhena which incorporated the parts of the previous building, whichhad escaped the flames, into the new building. the Basilica of San Giacomo Apostolo which, according to legend, contains the tree stump where Mary sat with dead Jesus in her arms, and the painting depicting the scene. The artist’s name is unknown, but folklore holds the painting was a divine gift. The Church of Sant’Andrea, dating back to the XVIII century, with the Romanic Clock Tower alongside from the XI-XIII century, and formerly a defence and watchtower. The tower contains the oldest clock in the world made by Giovanni Dondi. There is a painting in the church of the Crucifixion by Palma the Elder (1480-1528) and a baptistery, probably by Sansovino. The Church of San Domenico or Sanctuary of Christ stands on a small island. The church foundations are from the XIII century and initially it was administered by the Dominicans and, later, the Jesuits. It contains some very important paintings, including San Paolo stigmatised, the last work of Vittore Carpaccio and Crucified talking to San Thomas of Aquinoby Tintoretto. 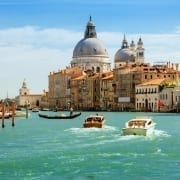 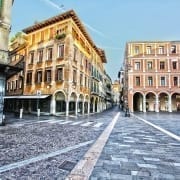 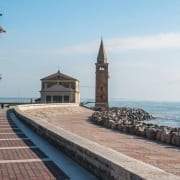 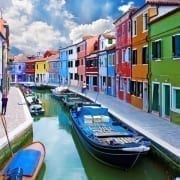 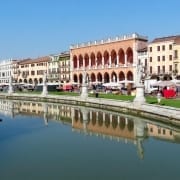 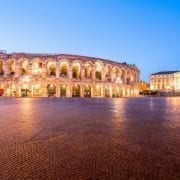